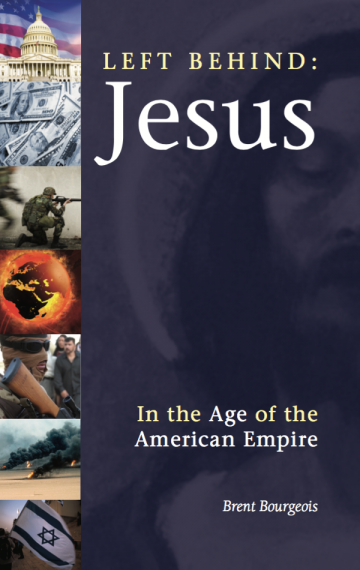 Are you a Christian, an American, and a Republican? Why?

Author Brent Bourgeois sets out to uncover the reason why, when he became a Christian, he instinctively, politically, philosophically, and intellectually turned to the left, when so many of his Christian friends, co-workers, and members of his congregation turned to the right. Left Behind: Jesus in the Age of the American Empire takes a unique look at America’s place in the world over the past sixty years, and examines how closely being a Christian fits with being an American.

“A prescient book if there ever was one, Left Behind: Jesus in the Age of the American Empire, foretells a major shift in cultural assumptions. No longer will being a follower of Jesus equate conservatism or strict adherence to the Republican script. Brent carefully reveals why and he does it with vulnerability and a remarkable lack of vitriol (thankfully). Bush-bashing is the easy road. Brent points to a better way: the long road of obedience to Jesus and his invitation to a new kind of citizenship. This book is a must for the prideful American church. I pray we read it.” —Charlie Peacock, author, At the Crossroads, New Way To Be Human, and founder of Art House America

BRENT BOURGEOIS is a highly respected recording artist, song-writer, record producer, music company executive, and founding member of the cutting-edge pop group Bourgeois Tagg. From being managed by rock impresario Bill Graham, to being the lone musi- cian backing an altar call by the evangelist Billy Graham, Bourgeois has acquired a positively unique perspective on American culture. Brent and his wife, Mary Ann, have four children and live in Elk Grove, California.