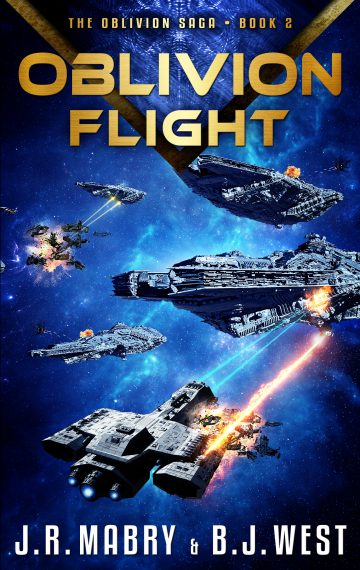 A scientific experiment goes horribly wrong. The earth…the galaxy…the universe is destroyed. And there’s only one person to blame…you.

Captain Jeff Bowers has been resurrected by an alien race—leaving him with mysterious powers…powers that could turn the tide of galactic war in the humans’ favor.

While testing those powers, a final experiment lands Jeff and his crew in an alternate reality, very much the same as their universe…and very different.

Uncertain who to trust, Jeff discovers that enemies are friends, and old friends turn out to be enemies…and nothing is as it seems.

Jeff must sort out where his loyalties lie, and what side to take in a galactic war between Earth and her rebellious colonies. Most of all, he wants to know what happened to the universe he left behind—if it’s even there at all…

Oblivion Flight is the second book in the thrilling Oblivion saga. If you love Star Trek and Starship Troopers, you simply cannot pass up this adventure.