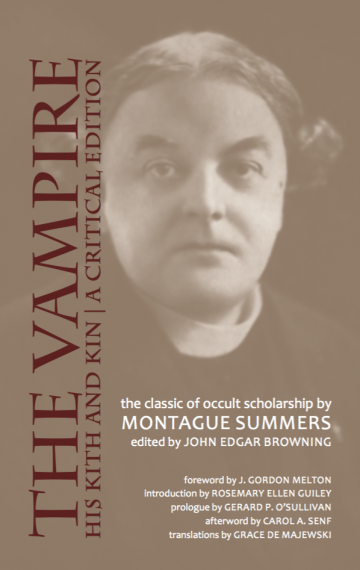 “Summers’s extensive albeit curious research on vampires has long been a classic in the field, and it’s exciting to see it being rescued from oblivion, as well as framed by such a renowned yet diverse group of scholars.” —Katherine Ramsland, The Science of Vampires

“This new edition cannot be recommended too highly to anyone with the faintest interest in Montague Summers or the origin of vampires.” —Nigel Suckling, Book of the Vampire

In all the dark pages of the supernatural there is no more terrible tradition than that of the Vampire, a pariah even among demons. Foul are his ravages; gruesome and seemingly barbaric are the ancient and approved methods by which folk rid themselves of this hideous pest. The tradition is world-wide and of the greatest antiquity. How did it arise? How did it spread? Does it indeed contain some vestige of truth, some memory of savage practice, some trace of cannibalism or worse? These and similar problems inevitably suggested by a consideration of Vampirism in its various aspects are fully discussed in this work which may not unfairly claim to be the first serious and fully documented study of a subject that in its details is of absorbing interest, although the circumstances are of necessity macabre and ghastly in the highest degree.

Included in this critical edition are the authoritative text, rare con- textual and source materials, correspondence, illustrations, as well as Greek and Latin translations. A biographical note and chronology are also included.