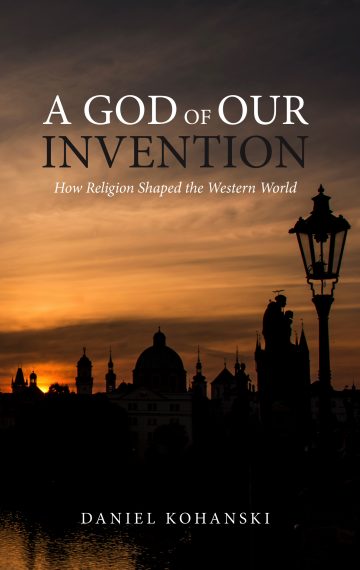 Uneasy about religion but not sure why? A God of Our Invention will make it clear.

Daniel Kohanski has spent decades working on problems of religion. Starting from a solid background in Conservative Judaism, he has studied law, Talmud, history, philosophy. He has researched the sources and pored over the scholarship and gotten much help from scholars along the way. Kohanski has achieved a book that historians of religion are calling “a wide-ranging introduction to Jewish and Christian theology,” “a most fruitful analysis of both traditions,” and “a stimulating contribution to vital discussions in Biblical studies and the science of religious history.”

A God of Our Invention takes the reader from the gods of the Ancient Near East to the modern threat of global climate change. It explains how one of those ancient nations, the Israelites, came up with an idea of a single God who rules over all, and how Christians used—and misused—Jewish ideas to become the leading power in Europe and to dominate much of the world.

A God of Our Invention will explain:

Buy A God of Our Invention for a clear understanding of the world we live in today!

PRAISE FOR A GOD OF OUR INVENTION

A uniquely critical, honest, readable and wide-ranging introduction to Jewish and Christian Theology.

Traditional theology all too often presents assertions and even preconceived doctrines instead of pursuing and posing questions. Here is an author who questions basic assumptions of Hebrew Bible interpretation and also his own childhood convictions. After painstaking research in Ancient Near Eastern history and Biblical exegesis, Daniel Kohanski now presents his own conclusions on religion, God, Torah. His work certainly is a stimulating contribution to vital discussions in Biblical studies and the science of religious history.

This volume offers an original take on the Christian tradition and on how it has built on and interrelated with Judaism. The various chapters interconnect vital aspects of Christianity in a way that offers a most fruitful analysis of both traditions.

—Dag Øistein Endsjø, Professor in the Study of Religion, University of Oslo, author of Greek Resurrection Beliefs and Sex and Religion

Daniel Kohanski’s A God of Our Invention is solidly researched history that traces the development of the major concepts in Judaism and Christianity and their impact on human civilization. Secular but not irreligious, erudite but not heavy, this book is notable for its balanced judgments and lucid presentation. A useful starting point for anyone seeking to understand the origins of the Abrahamic faiths and the roots of Western thought, culture, and politics.

In A God of Our Invention, Daniel Kohanski reveals the results of a long quest to understand the roots of religion and to connect them to the human condition. In tracing the development of religion from our Neolithic ancestors through the first Christians and its impact on society from the Roman empire to the present, he is systematic, objective, and impartial. He is also courageous, writing it at a time when religious differences have become as polarizing and divisive as at any other time in history. Ultimately, the answers to his questions are open-ended and private for each of us. Accordingly, each of us will take away something different. I am a theoretical physicist and, due to personal circumstances, steeped in all three great Western religions. With Kohanski’s explanations, I understand how each of these religions was influenced by the religions that came before. I regard A God of Our Invention as a fascinating must-read.

—Bulent Atalay, Ph.D., author of Math and the Mona Lisa