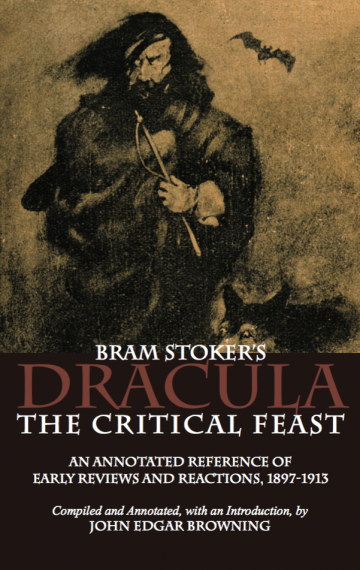 “Both scholars and devoted fans will rejoice in Bram Stoker’s Dracula: The Critical Feast. This exhaustive compilation fulfills a long-standing need in the realm of Dracula studies and provides a valuable fresh perspective on the early popular and critical reception of Stoker’s masterpiece.” —Dr. Margaret L. Carter, The Vampire in Literature: A Critical Bibliography and Different Blood: The Vampire as Alien

“This meticulously researched book puts to rest misconceptions long held by many Dracula scholars (myself included) about the reception of Stoker’s novel. A superb achievement and a scholar’s delight!” —Dr. Elizabeth Miller, Bram Stoker’s Dracula: A Documentary Journey into Vampire Country and the Dracula Phenomenon and Bram Stoker’s Notes for Dracula: A Facsimile Edition

There is a common misconception that the early critical reception of Bram Stoker’s famed vampire novel, Dracula (1897), was “mixed.” This reference book sets out to dispel this myth en force by offering the most exhaustive collection of early critical responses to Stoker’s novel ever assembled, including some 91 reviews and reactions as well as 36 different press notices, many of which have not been seen in print since they appeared over 100 years ago. What these early critical responses reveal about Dracula’s writing is that it was predominantly seen by early reviewers and responders to parallel, even supersede the Gothic horror works of such canonical writers as Mary Shelley, Ann Radcliffe, and Edgar Allan Poe.

Accompanying the critical responses are annotations and an introduction by the editor, a bibliographical afterword by J. Gordon Melton, 32 illustrations, and a bibliography.