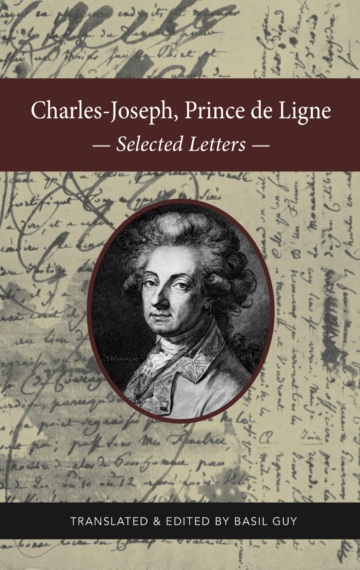 Charles-Joseph, Seventh Prince de Ligne, was from a prominent family in Hainaut, Belgium and served in the army of the Habsburg empire, his life a continuous paradox: soldier without command, ambassador without portfolio, crusader without a cross, and marshal without an army. Nor was he more fortunate with his writings. This state of affairs caused him to reflect that he would be an author without a following because of … his superiority. The 34 volumes of his Mélanges appeared confused, with the result that he is best read in anthologies.

This collection of letters and notes focuses on some of his political ideas or on his preening as a “man about town.” The two longest texts are to his wife and to Marquise de Coigny; most are mere notes. All have been carefully vetted for their reliability: gay, but not licentious, serious but not stodgy, both profound and lighthearted.

The translator and editor, Basil Guy, is a Professor Emeritus of French at U.C., Berkeley. He is a well-known specialist of the European eighteenth century, with a particular interest in the Prince de Ligne. His translation of Ligne’s Coup-d’Œil at Belœil has attracted special notice, as have his editions of other works by the Prince, published in collaboration with the Nouvelles Annales Prince de Ligne.