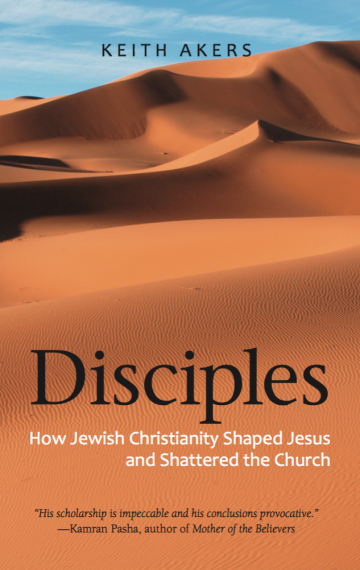 A book about the disciples of Jesus would typically start with Jesus himself: first there was Jesus, then he had disciples. This book suggests a fundamentally different story: first there was a movement, then Jesus emerged as its leader. This movement was markedly different from both rabbinic Judaism and gentile Christianity. It became known to history as “Jewish Christianity”—Jews who followed both Jesus (as they understood him) and the Jewish law (as they understood it).

These first disciples affirmed simple living, nonviolence, and vegetarianism, and rejected wealth, war, and animal sacrifices. Some two decades after Jesus was crucified, they split with their most famous missionary, Paul, over the issues of vegetarianism and eating meat from animal sacrifices. The history of Jewish Christianity takes our understanding of Christian origins into a completely new realm.

“I consider Disciples to be the finest analysis of Jewish Christianity yet written. Akers has carefully waded through the oftentimes confusing and contradictory historical records and produced a fresh analysis that promises to become the new standard in the field.” — The Rev. Jeffrey Bütz, instructor of Religious Studies, Penn State University, and author of The Secret Legacy of Jesus

“Much of the reasoning in this book rings true in terms of how social movements work. People who assert a belief in active nonviolence can nevertheless eat meat, oblivious to its violence, and so vegetarians and non- vegetarians could both be active in the early Christian movement.” — Rachel M. MacNair, Ph.D., author of The Psychology of Peace: An Introduction

“Those who are interested in the topic of Jesus’ nonviolence and that of the early church will find in this book a wealth of ideas and sources. The non-violence in question concerns both pacifism and vegetarianism. My own views have changed dramatically as a result of both the present manuscript as well as Akers’ previous book, The Lost Religion of Jesus.” —Daniel Dombrowski, Professor of Philosophy, Seattle University