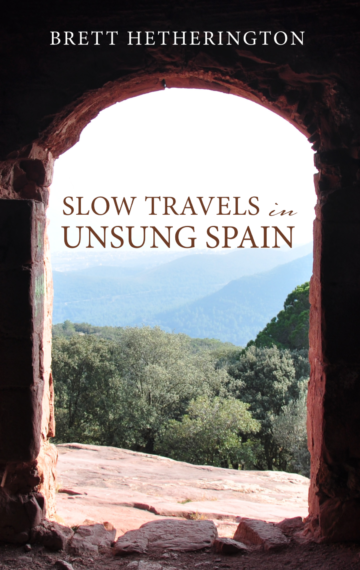 New!
Buy the kindle edition on amazonBuy the paperback on amazon

Slow Travels in Unsung Spain is a warts n’ all trip through some of Spain’s hidden gems: towns, cities, landscapes and cultural highlights that are typically overlooked by foreign tourists but which the Spanish often keep to themselves.

Against a backdrop of strikes and continuing economic hardship across Spain, the author travels alone by rail and bus, encountering the vibrant heritage of the regions, including a singing Gypsy by an ancient well in remote, unspoilt Extremadura, the creativity and resilience of a gourmet beggar in the big city of Zaragoza and a lone disabled pilgrim going home from the Camino de Santiago after quitting the road.

As well, he discovers intrepid ex-pats who are carving out their own lives away from international communities.

Slow Travels in Unsung Spain is new and fresh because it largely ignores Spain’s over-developed coastal resorts and islands, bypassing the standard fare of Spain’s beaches and fiestas or clichés around bullfighting, the siesta, and football. Instead the author, uncovers the real heartland where the next future waves of tourism could well be.

Brett Hetherington is a long-time Spanish resident and journalist. His sweet-and-sour travelogue uncovers a deeper Spain that has a rich culture and past, alive and well in these hidden corners of Europe.