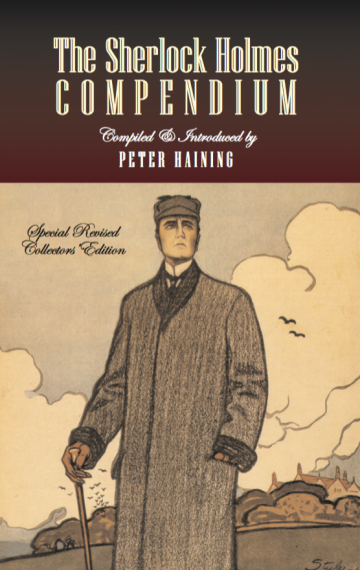 The phenomenon that is Sherlock Holmes is based on the series of novels and short stories written almost a century ago that have generated a world-wide network of enthusiasts who have spent the intervening years endlessly debating and investigating the life and cases of the most famous of all detectives.

The Sherlock Holmes Compendium was originally published to mark the fiftieth anniversary of the death of Sir Arthur Conan Doyle who created this remarkable saga and has now been revised by Peter Haining to include a wealth of unique articles, thought-provoking essays and rare illustrations that will delight old Sherlockians and fascinate new Holmesians. As well as covering the Great Detective’s career in the cinema and on TV, the book also includes a number of puzzles and quizzes to test the reader’s knowledge of the world of 221b Baker Street.

PETER HAINING is an internationally known expert on Sherlock Holmes and among his best-selling titles about the famous sleuth are The Sherlock Holmes Scrapbook, The Television Sherlock Holmes and The Final Adventures of Sherlock Holmes which is also published by The Apocryphile Press. In compiling this book, he was greatly helped by his long-time friend, John Bennett Shaw of New Mexico, owner of one of the largest collections of Holmesiana in the world.