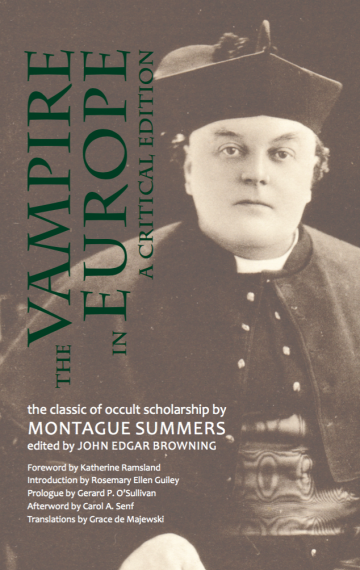 “Beautifully produced and a treasure to read, this edition is an absolute must for every serious student of the genre, whether they be of the old school or escapees from the latest wave of vampire entertainment.” —Dr. Jeanne Youngson, Founder and President of The Vampire Empire (established as The Count Dracula Fan Club in 1965)

“Thanks to the masterful editing of John Edgar Browning, in concert with the cogent commentary of a handful of other scholars, Montague Summers’s The Vampire in Europe finally achieves its promise as a classic in the canon of vampire literature. . . . Browning’s courageous forays into the realm of contemporary ‘real vampires’ brings the book fully into the twenty-first century, with first-person narratives from individuals who tend to be nocturnal and claim to need the nourishment of human blood.” —Dr. Michael E. Bell, folklorist and author of Food for the Dead: On the Trail of New England’s Vampires

The Vampire, His Kith and Kin examined the reasons for the old belief in Vampirism, its growth and dissemination in many lands, and its crystallization into a permanent and determinate legend. This new volume, The Vampire in Europe, uniform with the other, deals with the subject from a historical point of view and presents the evidence which gave rise to the theories. This evidence, drawn from little-known authors, musty chronicles, and the obscurer occultists, is in many cases derived from official sources, civil and ecclesiastical. The first chapter treats of Vampirism in ancient Greece and Rome. Accounts of the extraordinary outbreaks of Vampirism in England during the twelfth and thirteenth centuries have been gathered from Geoffrey of Monmouth and William of Newburgh. Particular attention is paid to the alleged irritation which gave rise to so much literature in the early eighteenth century, while the curious situation in modern Greece is fully discussed.

Included in this critical edition are the authoritative text, rare contextual and source materials, illustrations, criticism, contemporary reviews, and Greek and Latin translations. A biographical note is also included.

ABOUT THE EDITOR: John Edgar Browning is a Marion L. Brittain Postdoctoral Fellow at the Georgia Institute of Technology. He is an authority on Dracula, vampires, and horror films and is the co-author or co-editor of twelve other published or forthcoming books, including The Vampire, His Kith and Kin: A Critical Edition and The Forgotten Writings of Bram Stoker.